What is hexagonal binning?

Hexagonal binning (hex bins for short) is a data aggregation technique. It uses an overlay of hexagon shapes rather than geopolitical boundaries to display different levels of data. In the world of GIS and cartography, it's a powerful tool for visualizing a large amount of location-based information in a meaningful way. 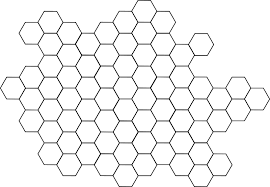 At PiinPoint, we use hex bins to help you interpret demographic data like population, income, ethnicity, age, and households at a high-level.

In the US, demographic data is generally aggregated at the block group level, and in Canada, at the dissemination area (or DA). You can learn more about levels of geography here.

While blocks and DAs display the most granular and accessible form of population statistics, they can be difficult to interpret across a large geography because they are all different sizes. This is because DAs/Blocks are normalized; and as such should be relatively equal in the number of people, however not relatively equal in size. This can cause you to misinterpret the data.

Cartographers use hex bins to represent data equally. All areas are compared using the same sized shapes, so that when measuring one against another, you're comparing apples to apples.

For example, let's say you're looking to find out where there are the most people living in Toronto. Stats Canada has normalized all the DAs in the city, making sure that each one has approximately 400 households:

The problem is, with each DA being a different size, you get a smattering of results when trying to rank them all by Population. There are dark red areas right beside green ones, simply because the size of the shapes are drastically different.

When we switch the aggregation from randomly sized polygons to evenly sized hexagons, we can pull much more meaningful trends across the geography. Our hex bin feature will display the highest concentration of your selected demographic variables, across map area in view.

This illustrates which areas have the highest concentration of a given demographic based on an area constraint, not a population constraint.

In Vegas, block groups are very large around the perimeter of the city. Take this block southwest of Summerlin here, which is in the 100th percentile for all blocks in Vegas, at 2,180 Family Households:

Because it covers such a large area, more Family Households are being ranked in that block, leaving you with a heatmap that looks like the one above.

In actual fact, areas like this one here are more interesting, where dozens of smaller blocks rank high, but more importantly cover a small area so we can actually know where the population lies:

Hexagons make an immense difference in this case. This second visualization shows much more accurately where there are a high concentration of Family Households within consistent geographic confines.

How to Use Hex Bins in PiinPoint

There are now two options in PiinPoint for producing a chloropleth map, either by blocks/DAs, or via hex bins.

💡Pro User Tip - by default, Hex Bins will be set to return the top 20 percent of whichever demographic(s) you are exploring. You can adjust which percentiles you view on the map by using the slider that appears on the target market legend. 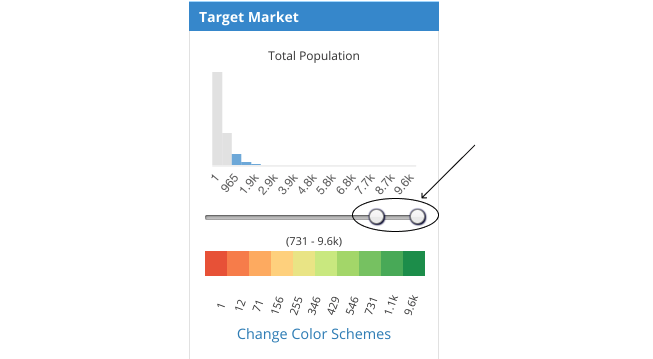 For any variable that deals with an absolute count (e.g. Total Population, Total Households, etc.), the data is redistributed from the block groups into hex shapes based on its percent overlap with the underlying block groups.

On the other hand, if the hexagon is completely filled by a single, larger block with 100 people (say it covers 80% of the block's shape) then the hexagon's population will be 80 people.

Still have questions? For more information, connect with your Customer Success Manager in the Chat tool or email support@piinpoint.com.