All Collections
FAQs
What is Urbanicity in PiinPoint?

What is Urbanicity in PiinPoint?

When planning a market strategy, retailers and real estate professionals alike know that the way a store presents itself in a market can be vastly different depending on the characteristics of the market.

One of the most obvious ways markets differ is through their urbanicity; where do they sit on a spectrum of Rural, vs Suburban, vs Urban?

Why does Urbanicity Matter?

Urbanicity classifications, and digging into the micro-market profiles of a trade area can impact things like:

The separation between urbanicity classes is a valuable measure in understanding the difference between markets, as it enables users to compare geographies across Canada* using a consistent set of traits.

*Urbanicity is only available across Canadian geographies at this point in time. For insight into accessing it in the US or Australia, please contact your Customer Success Manager.

How Does it Work?

The distribution of these four criteria are ranked and combined across all of Canada at the Dissemination Area (DA) level. For each of the criteria, a 1 km circular buffer is created from the centre of each DA, in which a count of each of the four criteria is taken, creating a consistent density measure across the national landscape. Each DA is given a z-score for each of the criteria based on the distribution of that criteria across all DAs nationally. Finally, the 4 z-scores for each unique DA are summed to arrive at a final z-score.

Using a national method of distribution ensures that we are always comparing similar markets to each other, meaning the most dense urban class in Toronto will be a very similar market to all others of that class across Canada.

This ensures that markets like the Greater Toronto Area are not directly compared to markets like Winnipeg, Saskatoon, Edmonton, etc., which while compared to other areas of the province they may appear as "most urban", their urbanicity is different from that of a downtown Toronto.

A final score for each is then computed called the z-score. The z-score is what is used to classify each urban class. PiinPoint’s traditional method of breaks is based on a natural breaks (jenks) method, dividing each DA’s z-score into 5 unique urban classifications from the most densely urban to rural areas.

While seeing the z-score classification may describe this methodology well for statisticians, the best way to demonstrate the differences between urbanicity levels is to view them on a map!

You can see there are clear pockets for the Downtown area of Toronto, Mississauga, Markham, Scarborough, and others. 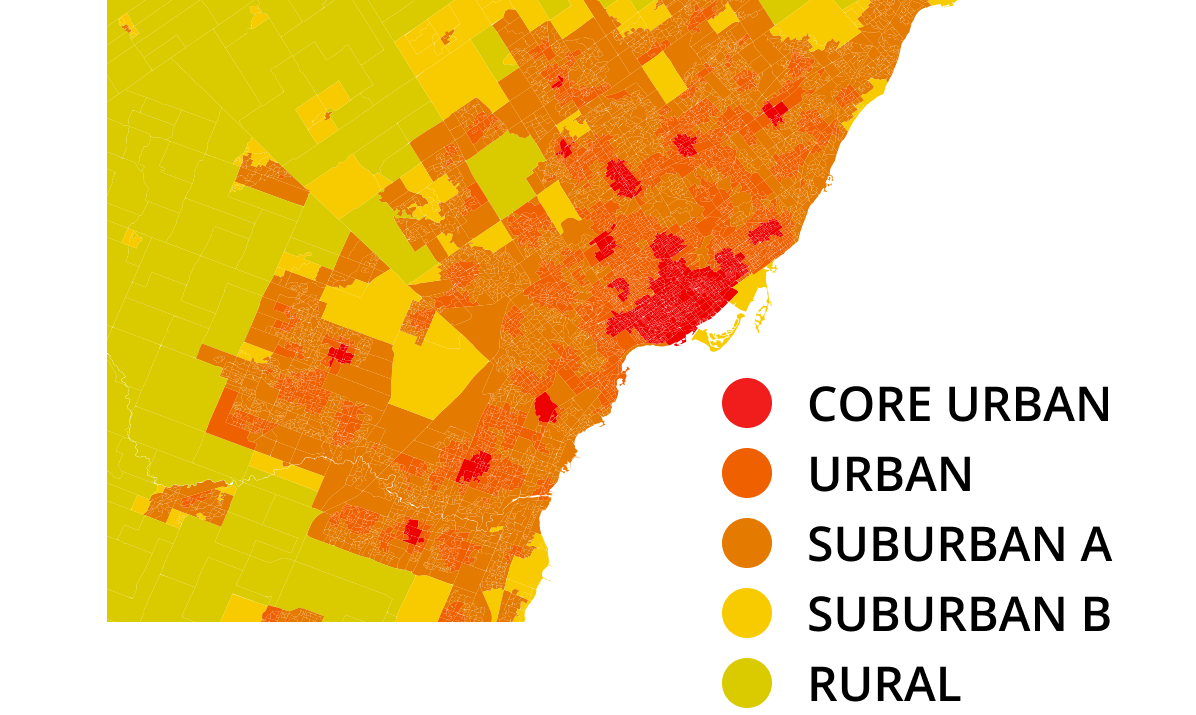 Similarly, the main pockets of dense urban areas are visible in Waterloo Region. Newly developed neighbourhoods which are dominated by residential suburbs are clearly marked in Yellow (Suburban B).

Lastly, we see in Winnipeg there are two Core Urban areas, marked by the South Portage (main downtown) and Polo Park.

Urbanicity can be applied in several ways in PiinPoint.

Want to learn more about Urbanicity? Don't hesitate to contact your Customer Success Manager via the Chat button in app, or email support@piinpoint.com.