All Collections
Finding Your Target Market
Daytime Population, the Latest Update to Our Demographic Offering

Daytime Population, the Latest Update to Our Demographic Offering

Make use of our most recent demographic update to go beyond the information available in the census and understand daytime populations.

Written by Nick Kyriakou
Updated over a week ago

With the most recent releases of the 2021 Canadian Census data combined with our latest advances in Mobile Location Data (MLD) methodologies, we’ve been working hard to develop a new and more accurate way of calculating Daytime Population. Available for Canadian geographies, this new Daytime Population can provide you with important counts of the population within an area during the day. Below, you can learn more about the value this demographic can bring you, the methodology used in this update, as well as a step-by-step guide for its use in the app.

What Kind of Value can this Bring My Brand?

By looking at the daytime population of an area, you can gain vital information about the population trends and spikes across geographies during the hours most important to your brand. Discover what areas people are generally traveling into, or out of, during the day to inform your store hours and menu options (are you more likely to get a workday lunch crowd or family diners?). Combine Daytime Population with other demographics such as types of employment to determine who is traveling to your areas during the day. This information is valuable when planning your network so you can look beyond standard demographics and get a sense of customer behavior.

To calculate Daytime Population, we’ve taken a look at the visitor counts across dissemination areas (DA’s) in Canada allowing us to understand the movement patterns of the population and see where people are during peak daytime hours. These visitor counts are based on mobile device pings from our MLD provider NEAR, so we can ensure as much accuracy as possible. Using these visitor counts, we redistributed the full Canadian population across DA’s to calculate the new Daytime Population. Then, to validate the calculations, we looked at the urbanicity of DA’s to ensure our Daytime Population counts are consistent with what can be expected of a DA that rests in any given level of urbanicity.

Urbanicity is a term we at PiinPoint have coined to describe the state at which a geography rests in the spectrum between rural and urban. We can calculate it using indicators such as the number of dwellings, mobile device activity, retail activity, and road network density. For example, downtown Montreal indexes quite highly with each of those indicators, and is therefore determined to be a core urban area. Having a strong grasp on the level of urbanicity in an area allows us to identify which DA’s are more or less populated during the daytime, and we can then use that information to ensure our Daytime Population calculations are as accurate as possible.

To further demonstrate this relationship, consider the map below which overlays the level of urbanicity in pink, with the amount of daytime population in blue. We can see that in the downtown and core urban areas of Montreal, there are also higher levels of daytime population (shown by the deeper concentration of colour in both pink and blue). Further, this allows us to see pockets where daytime population is relatively high in regions with more rural urbanicity which alludes to specific points of interest such as airports or industrial sites, which bring in more population during the daytime hours than would be otherwise expected. 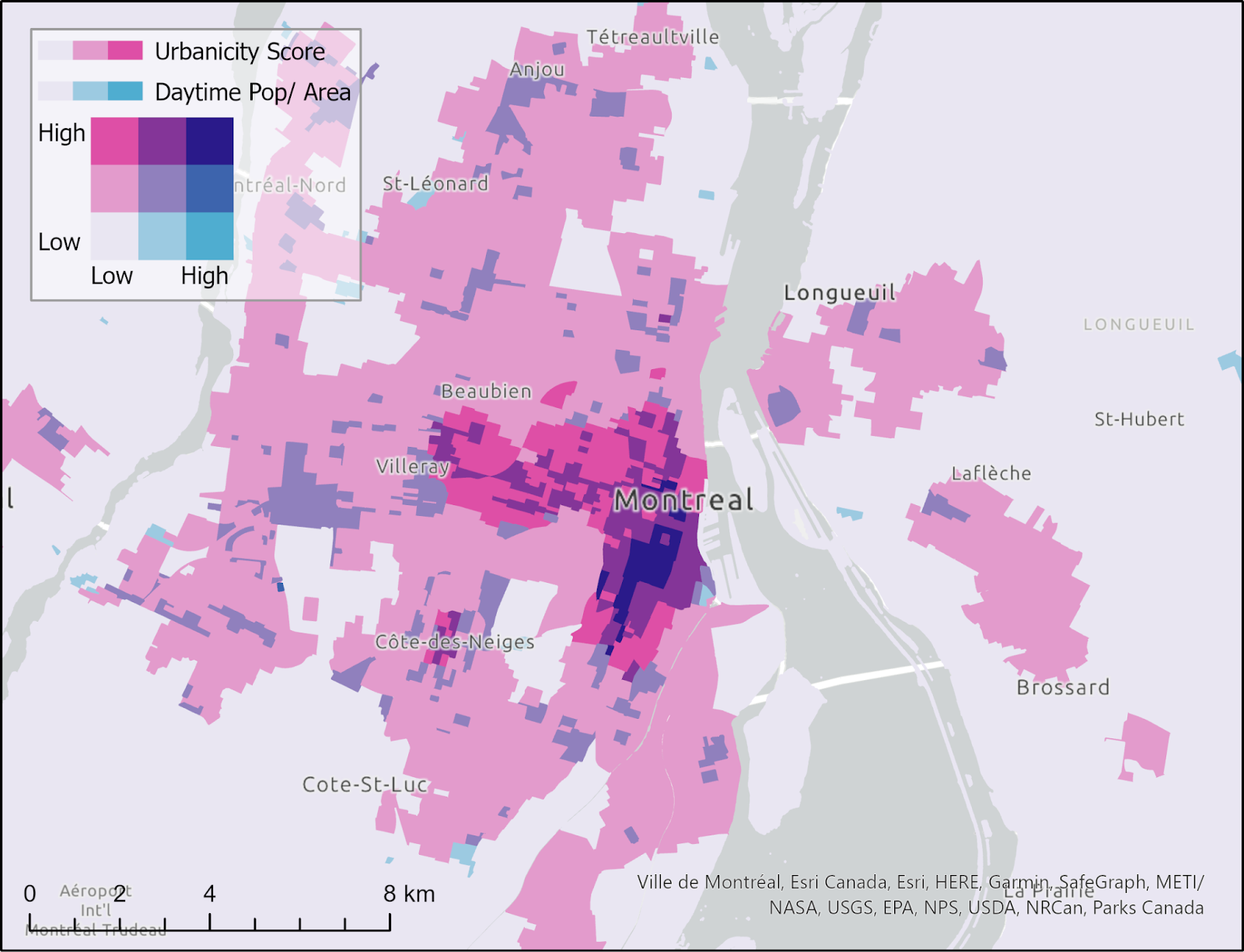 To make use of this newly updated variable, first navigate to the Target Market panel found on the left hand side of your screen, and click “Add Criteria”:

Use the searchbar at the top right corner of the next popup to find the Total Daytime Population demographic, and click it to add it to the panel. Once added, click “Save”, and you will notice Daytime Population gets added to your Target Market panel. You are now able to use the variable and conduct your analyses.

Toggle on the Heatmap in the Target Market panel to get a high level overview of the Daytime Population across DA’s. You can also click on each DA to view the exact count within it, as well as how that DA indexes across all other DA’s on your screen: 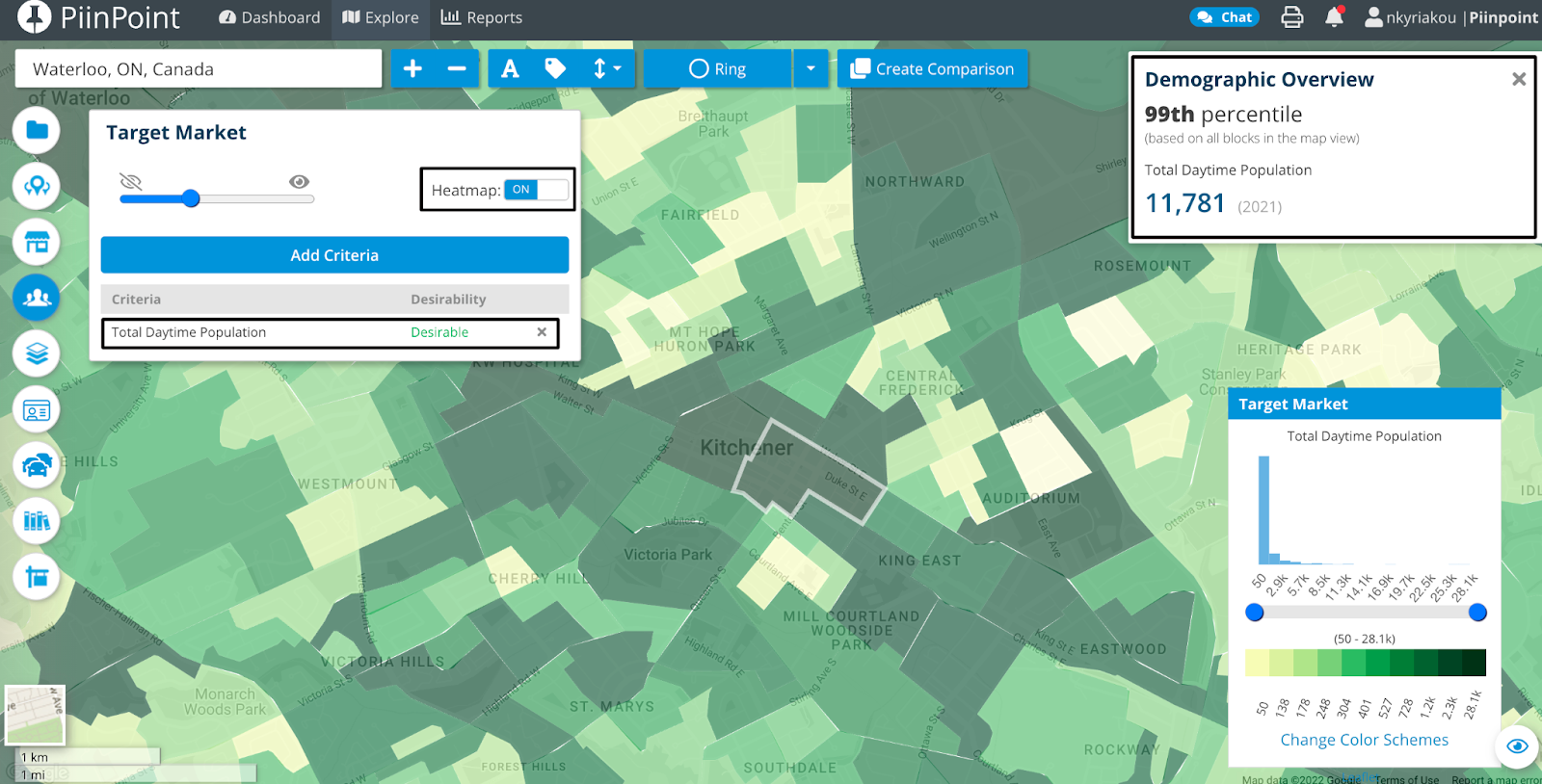 Add both Total Daytime Population and Total Population to the Target Market panel and set Total Population to Undesirable. This will tell PiinPoint to look specifically at pockets that have the greatest surge of visitors during the daytime. For example, below it can be seen the University of Waterloo campus has a much higher daytime population relative to its total population of residents: 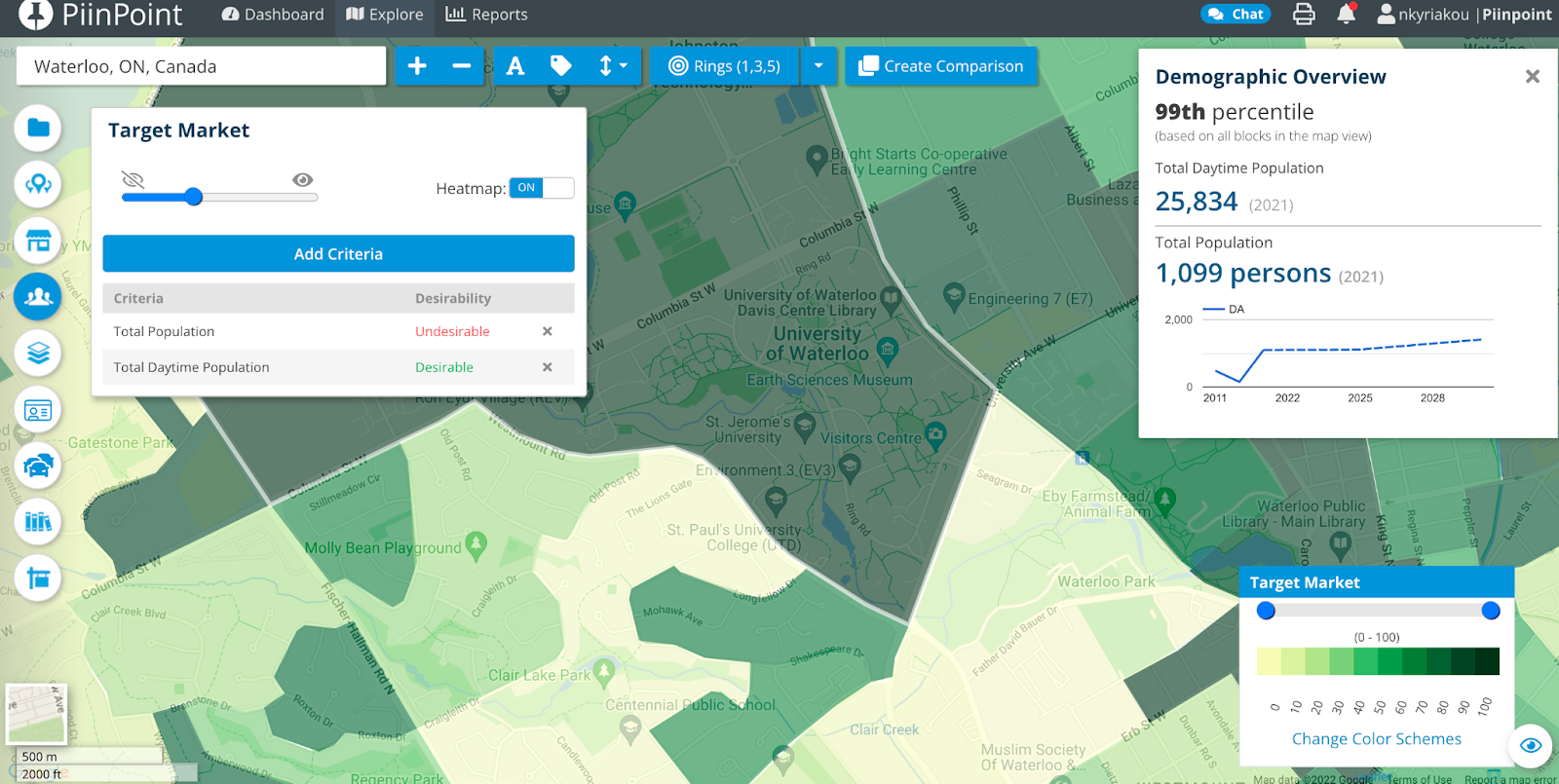 With Daytime Population added to your Target Market panel, the demographic will also be automatically added to any report you create giving you the ability to see the exact counts of daytime population within a set trade area. For more information on how to build and use reports, check out this article here.

If you have more questions on this topic feel free to contact your Customer Success Manager via the Chat or email support@piinpoint.com